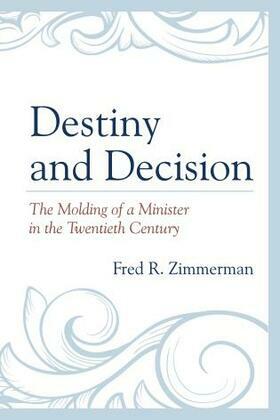 In this autobiography of a Christian minister, Fred R. Zimmerman tells the story of his life on the stage of world events that affected him either directly or indirectly. Born to be a minister, he first became aware of his calling early on in his boyhood. Orphaned at eighteen months during the flu pandemic of 1918–19, he was fortunate enough to be adopted by a childless couple. In their capacity as committed church-going Christians, he was wisely nurtured in his mission to become a minister. During his college and seminary years, crises accompanying this destiny began to arise. As his ministry developed through the years, destiny and decision became the yoke (Matthew 11:27–30) under which he exercised the burden of being a pastor. This is therefore a story not primarily of a person but of a God-appointed ministry.