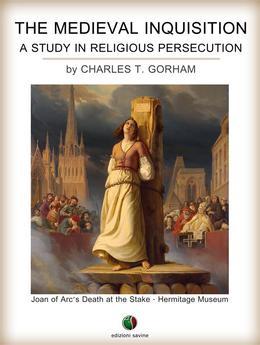 The Medieval Inquisition. A Study in Religious Persecution

With this book, published for the Rationalist Press Association in 1918, Charles T. Gorham made a good structured summary of the Medieval Inquisition action. He dealt in particular with the social aspects of this religious persecution and its consequences on European countries life that were mainly hit by the Holy Office’s zeal.
In the bibliographic notes, where Gorham indicated the books he grounded the work draft, we added links that can be freely consulted with the intent to offer a rapid access to those who would go into the argument in more depth.
Almost one hundred years later, this new digital edition has been upgraded through the addition of many pictures.

“… The present inquiry is not concerned with the truth or falsehood of the Church’s theological basis, but only with its effects. The general conditions of the Middle Ages being what they were, those effects were in a sense inevitable, and the moral condemnation which must be visited upon the medieval Church applies less to individuals than to the system which produced them — a system which was incompatible not only with the rights of individuals, but with the progress of humanity in civilization and happiness ….” (Charles T. Gorham)