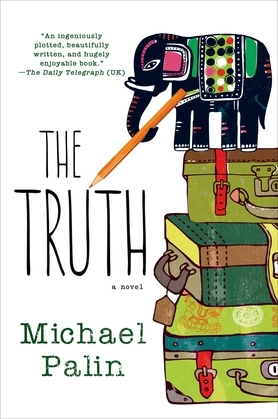 "An ingeniously plotted, beautifully written and hugely enjoyable book that raises tricky questions about... our need for heroes [and] the price of personal compromise.'"?The Daily Telegraph

For the first time since his much-beloved tale Hemingway's Chair was published in 1998, Michael Palin pens a new novel featuring the warm and witty story of an everyman, a tantalizing offer, a journey to India, and the search for the truth.

Keith Mabbut is at a crossroads in his life. A professional writer of some repute, he has reached the age of fifty-six with nothing resembling the success of his two great literary heroes, George Orwell and Albert Camus. When he is offered the opportunity of a lifetime?to write the biography of the elusive Hamish Melville, a widely respected and highly influential activist and humanitarian?he seizes the chance to write something meaningful. His search to find out the real story behind the legend takes Mabbut to the lush landscapes and environmental hotspots of India.

The more he discovers about Melville, the more he admires him?and the more he connects with an idealist who wanted to make a difference. But is his quarry really who he claims to be? As Keith discovers, the truth can be whatever we make it.
In this wonderful, heartwarming novel, Michael Palin turns his considerable skills to fiction in the story of an ordinary man on an extraordinary adventure.

"[Palin's] book is well paced, his prose, carefully hewn, his characters fully developed and convincingly human. And his comic timing is impeccable." ?The Washington Post on Hemingway's Chair

"This book's strengths are . . . its dry, deftly, understated wit, its careful plot and character construction; it's clever, on-the-money dialogue . . . Those pleasures carry you a long way." ?The New York Times Book Review on Hemingway's Chair