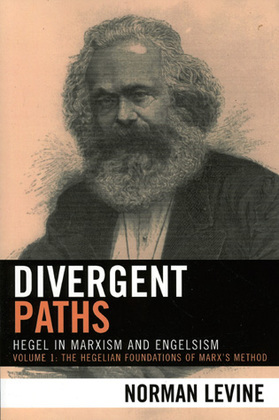 by Norman Levine (Author)
Buy for $45.50 Excerpt
Nonfiction History Other Historiography Social science Political science History & theory Political ideologies Communism & socialism
warning_amber
One or more licenses for this book have been acquired by your organisation details

Divergent Paths is the first volume of a groundbreaking three-volume work. Its purpose is to explore the relationship between Hegel and Marx; to define the relationship between Hegel and Engels; and to distinguish between the theories of Marxism and Engelsism. Marx used Feuerbach towards the critique and ultimate transformation of Hegel's phenomenology and humanism. This transformation, which cut out Hegel's idealism by identifying the environment in which people produced their sustenance as the subject of history, marks the genesis of historical materialism. Marx continued to use Hegel's logical categories. In chapter three of Divergent Paths, Norman Levine conducts an in depth study of Marx's 1841 doctoral dissertation, The Difference Between Democritus' and Epicurus' Philosophy of Nature. It is the center of gravity and controversy of Levine's study. Placed alongside Hegel's Philosophy of History, Levine isolates the categories Marx appropriated from Hegel to show, conclusively, that Marx was not a dialectical materialist. Levine then claims that Engels totally distorted the Hegelian legacy, and this debasement is enshrined in his 1887 essay 'Ludwig Feuerbach and The End of Classical German Philosophy.' Levine brilliantly locates Marxism as the theory of Marx, and Engelsism the theory of Engels. According to Levine both embodied a separate view of history and society, and their contradictions are expressive, in part, of their divergent receptions of Hegel. This is an analysis like no other published to date with two more volumes planned. Philosophers, sociologists, anthropologists and historiographers of Marx and Engels cannot afford to miss this study.