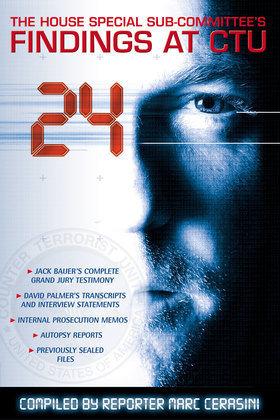 Last season, CIA agent Jack Bauer, played by Golden Globe award-winning actor Keifer Sutherland, had us glued to our TVs and cursing the time clock as he uncovered a plot to assassinate presidential nominee, David Palmer. With just 24 hours to identify the killer, Bauer also had to deal with the kidnapping of his wife and daughter and the existence of a mole at the agency.

This season he's at it again, helping President David Palmer save Los Angeles from nuclear ravage.

Lest you think Jack had some down time between life-altering experiences, check out 24: The House Special Subcommittees Findings at CTU. It's a new book providing a riveting account of Jack's grueling appearance before our government's most inquiring minds during their probe into alleged wrongdoings at CTU that first fateful 24 hour period. The testimony from these closed hearings was leaked to investigative journalist Marc Cerasini, who then ran with it to publisher HarperCollins.

With some of the finest reporting seen since Woodward's coverage of the Pentagon Papers, this book contains: