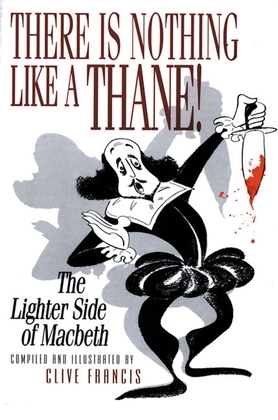 There is Nothing Like a Thane is a follow-up to Clive Francis's highly successful There is Nothing Like a Dane! The Lighter Side of Hamlet. Thane is a hilarious compilation of unintentional funny moments from a variety of productions of Macbeth - interwoven with Francis's witty caricatures. It also delves into the many superstitions, which have dogged the play since 1603, making it possibly the unluckiest play ever written

We hear of how some actors fared better than others when playing the role of the Thane. If Ralph Richardson's was the worst, Peter O'Toole's was certainly the funniest. Olivier was deemed the greatest, John Gielgud the must successful, and Charles Laughton the silliest. We also hear from Orson Welles, David Garrick, Charles Dickens and William McGonagall - who refused to die for fear of upsetting his audience. Not to be outdone we shall hear from a number of Lady Macbeths as well, including Sybil Thorndike, who'd pray every night in the wings so as to ward away evil spirits.

This is a book for all those who love the theater, especially the Bard.