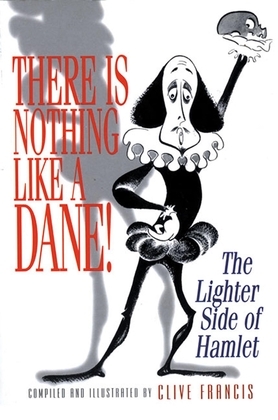 There is Nothing Like a Dane is an affectionate compilation of mostly funny (but sometimes serious) bits and pieces about Hamlet - interwoven with Clive Francis's delectable caricatures of various members of the theatrical profession strutting their stuff.

The great hall of fame is duly visited, though its inhabitants are not always as dignified as they would like to seem. Here are glimpses in word and pictures of the likes of Donald Wolfit, Kenneth Branagh, John Gielgud, Henry Irving, Jonathan Pryce, John Barrymore, Alec Guinness, Richard Burton and of course, Laurence Olivier. The tone is also elevated now and then by contributions from great writers such as Mark Twain, Charles Dickens, Henry Fielding and P.G. Wodehouse. But the chief delight is in the unexpected: a stubbornly mustachioed Ophelia in Poona, India, an inadvertently horn-rimmed Hamlet on London's Waterloo Road - and would you believe Tony Hancock, Tommy Cooper and even June Whitfield as the Prince of Denmark?

This is a book for actors and audiences - and Shakespeare buffs on their day off.

"A charming bit of fluff for Shakespeare enthusiasts."--Publishers Weekly