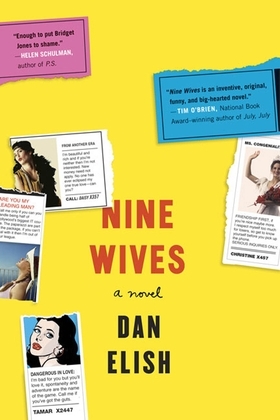 Henry Mann is a 32-year-old bachelor who has spent the last few years watching everyone he knows get married. After the most recent wedding, where an intoxicated Henry proposes to no less than three women (including the rabbi), it dawns on him that being single isn't that much fun after all.

"Nine Wives is an inventive, original, funny, and big-hearted novel, a book I will recommend to anyone interested in good fiction."--Tim O'Brien, National Book Award-winning author of July, July

"Henry Mann wages battle between the real world and the imagined one with equal parts goofiness and suaveness. A very charming novel."?Antonya Nelson, author of Female Trouble

"In a world where Sex and the City and Bergdorff Blondes tell us what we think we need to know about relationships, Elish has created a world far more real without stinting on the wit, insight, or hilarity."?Jonathan Rabb, author of The Book of Q

"Dan Elish at last shows women what lurks within the minds of men."?Helen Ellis, author of Eating the Cheshire Cat

"I read Nine Wives while Dan and I were dating. I didn't speak to him for a week, but I married him anyway."?Andrea Elish