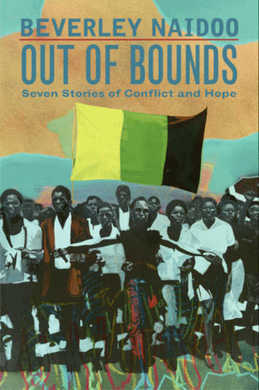 Out of Bounds: Seven Stories of Conflict and Hope

We are the young people,
We will not be broken!
We demand freedom
And say
"Away with slavery
In our land of Africa!"

For almost fifty years apartheid forced the young people of South Africa to live apart as Blacks, Whites, Indians, and "Coloreds." This unique and dramatic collection of stories -- by native South African and Carnegie Medalist Beverley Naidoo -- is about young people's choices in a beautiful country made ugly by injustice.

Each story is set in a different decade during the last half of the twentieth century and into the twenty-first, and features fictional characters caught up in very real events. Included is a Timeline Across Apartheid, which recounts some of the restrictive laws passed during this era, the events leading up to South Africa's first free democratic elections, and the establishment of a new "rainbow government" that leads the country today.