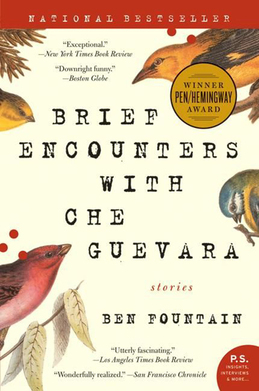 The well-intentioned protagonists of Brief Encounters with Che Guevara are caught -- to both disastrous and hilarious effect -- in the maelstrom of political and social upheaval surrounding them. In "Near-Extinct Birds of the Central Cordillera," an ornithologist being held hostage in the Colombian rain forest finds that he respects his captors for their commitment to a cause, until he realizes that the Revolution looks a lot like big business. In "The Good Ones Are Already Taken," the wife of a Special Forces officer battles a Haitian voodoo goddess with whom her husband is carrying on a not-entirely-spiritual relationship. And in "The Lion's Mouth," a disillusioned aid worker makes a Faustian bargain to become a diamond smuggler for the greater good. With masterful pacing and a robust sense of the absurd, each story in Brief Encounters with Che Guevara is a self-contained adventure, steeped in the heady mix of tragedy and danger, excitement and hope, that characterizes countries in transition.

Through Fountain's rounded and novelistic prose, these intelligent and keenly observed stories are painted in provocative and vibrant detail across a global canvas. Brief Encounters with Che Guevara marks the arrival of a striking and resonant new voice that speaks adeptly to the intimate connection between the foreign, the familiar, and the inescapably human.