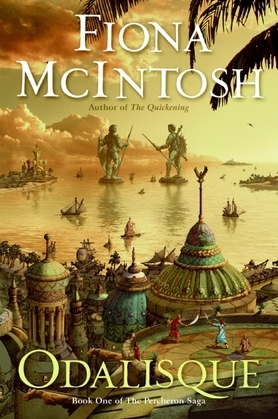 Captured by slave traders in the inhospitable desert, Lazar fought his way to freedom, earning the coveted position of Spur of Percheron. Charged with protecting his adopted city from enemies on both sides of its walls, he has led a charmed life as confidant to and protector of Zar Joreb for many years. But now Joreb is dead. . . .

Though Joreb's well-intentioned fifteen-year-old heir, Boaz, will take the title of Zar, the balance of power lies in the hands of his beautiful and cruelly ambitious mother, a former harem slave who rose to power by the Zar's favor. Aside from Lazar, whom Boaz trusts and respects, the young Zar's only friend is Pez, the court jester, a misshapen dwarf whose tricks and diversions are accepted only because he is known to be mad.

When a stunning young girl is brought to the palace to fill a space in Boaz's harem, both Boaz and Lazar are surprised by their unexpectedly strong reactions to her. But Ana, the odalisque, finds the closeted world of the harem stifling and unbearable. And unbeknownst to all, the gods themselves are beginning to rise in a cyclical battle that is just beginning, and will enmesh everyone in the palace in a struggle for the very soul of Percheron.