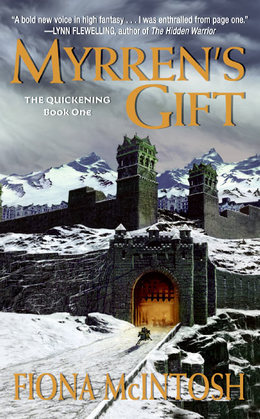 Destined by blood to command the Morgravian army, Wyl Thirsk assumes his awesome responsibility while barely a teenager when his father meets an early death -- a duty that calls him to the royal palace of Stoneheart and into the company of the crown prince Celimus. Already a spiteful and cruel despot who delights in the suffering of others, Celimus forces his virtuous new general to bear witness to his depraved "entertainments." But a kindness to a condemned witch in her final agonizing hours earns young Thirsk a miraculous bequest, at the same time inflaming the wrath of his liege lord.

With dread war looming in the north, Wyl must obey the treacherous dictates of Celimus and embark on a suicidal journey to the court of an ancient enemy -- armed with a strange and awesome secret that could prove both boon and curse. For unless he accepts Myrren's gift, it will surely destroy him . . . and the land he must defend as well.