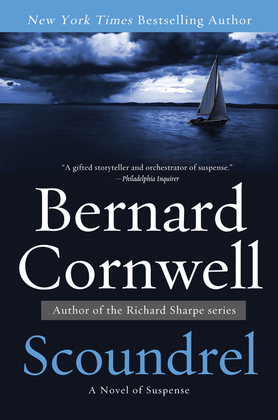 “A gifted storyteller and orchestrator of suspense.”
—Philadelphia Inquirer

“Bernard Cornwell is to the yachting adventure novel what ex-jockey Dick Francis is to the racetrack thriller.”
—Orlando Sentinel

The New York Times bestselling author of The Fort, the Saxon Tales, and the immensely popular Richard Sharpe novels, Bernard Cornwell has been called, “perhaps the greatest writer of historical adventure novels today” (Washington Post). He demonstrates another side of his extraordinary storytelling talents with Scoundrel, a contemporary tale of excitement and danger on high and treacherous seas. A gripping tale of an outlaw yacht captain who decides to cross the Irish Republican Army for a $5 million payday only to find himself pursued by intelligence agents, terrorists, and killers across perilous open waters, Scoundrel is a masterful thriller in the Tom Clancy vein—a masterwork of suspense from one of today’s most versatile and accomplished popular novelists.