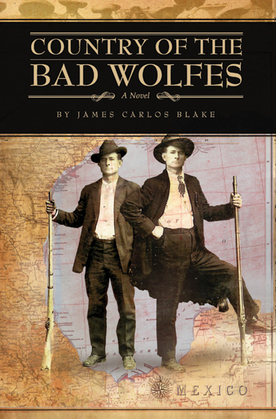 Country of the Bad Wolfes

by James Carlos Blake (Author)
Buy for $4.99 Excerpt
Fiction Historical Westerns Action & adventure
warning_amber
One or more licenses for this book have been acquired by your organisation details
A page-turning epic about the making of a borderland crime family, Country of the Bad Wolfes will appeal both to aficionados of family sagas and to fans of hard-knuckled crime novels by the likes of Donald Pollack, Elmore Leonard, James Lee Burke and James Ellroy.

Basing the novel partly on his own ancestors, Blake presents the story of the Wolfe family — spanning three generations, centering on two sets of identical twins and the women they love, and ranging from New England to the heart of Mexico before arriving at its powerful climax at the Rio Grande.

Begat by an Irish-English pirate in New Hampshire in 1828, the Wolfe family follows its manifest destiny into war-torn Mexico. There, through the connection of a mysterious American named Edward Little, their fortunes intertwine with those of Porfirio Díaz, who will rule the country for more than thirty years before his overthrow by the Revolution of 1910. In the course of those tumultuous chapters in American and Mexican history, as Díaz grows in power, the Wolfes grow rich and forge a violent history of their own, spawning a fearsome legacy that will pursue them to a climactic reckoning at the Río Grande.

A master of the historical novel, James Carlos Blake has been hailed as “a poet of the damned who writes like an angel” (Donald Newlove, Kirkus Reviews). Library Journal says of Blake's latest novel that it is "brawling, high-spirited, and superbly realized ... this novel offers many pleasures, including endearing characters, unlikely love stories, and all manner of mayhem."

James Carlos Blake was born in Mexico and grew up in Texas and Florida. He is the author of nine other novels and a collection of short works. Among his literary honors are the Los Angeles Times Book Prize, the Southwest Book Award, and the Falcon Award.
Format
EPUB
Protection
Watermark
Publication date
January 31, 2012
Publisher
Cinco Puntos Press
Page count
368
ISBN
9781935955122
Paper ISBN
9781935955030
File size
1 MB
505310
item