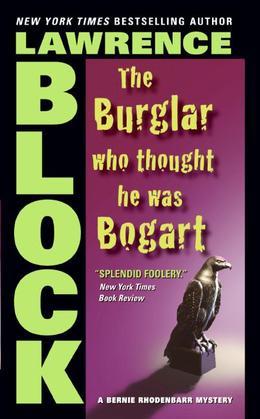 The Burglar Who Thought He Was Bogart

Bookseller Bernie Rhodenbarr's in love—with an exotic Eastern European beauty who shares his obsession with Humphrey Bogart movies. He's in heaven, munching popcorn with his new amour every night at a Bogart Film Festival—until their Casablanca-esque idyll is cut short by his other secret passion: burglary.

When he's hired to pilfer a portfolio of valuable documents from a Park Avenue apartment, Bernie can hardly refuse. But the occupant's early return forces Bernie to flee empty-handed—and he soon finds himself implicated in a murder. Before you can say "who stole the strawberries?" he's hunting for a killer, up to his neck in the outrageous intrigues of a tiny Balkan nation . . . and menaced by more sinister fat men and unsavory toadies than the great Bogie himself butted heads with in pursuit of that darn bird!