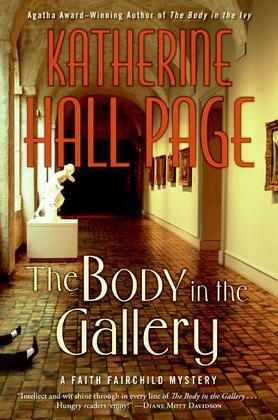 The Body in the Gallery

Faith's catering business has been slow with the downturn of the economy, so when her friend Patsy Avery proposes that she take over the café at Aleford's Ganley Art Museum, it seems like a not-to-be-missed opportunity. And Patsy has an ulterior motive—she discovers that the Romare Bearden piece she lent the museum has been switched with a fake and wants Faith to snoop around to find the culprit.

Life at the museum doesn't stay calm for long and Faith is soon enmeshed in the Ganley's murky past and present as she struggles to make connections among apparently disparate items: the fake Bearden, Pepperidge Farm Goldfish crackers, and a Jane Doe corpse that turns up as an unintended part of an art installation. At home, son Ben, now in the hell known as middle school, becomes involved in a cyberbullying escapade and husband Tom wants his wife to morph into June Cleaver.

Her investigation takes Faith into Boston's art scene and historic Beacon Hill, as well as into the lives behind the façade of the Ganley's very proper board of trustees. She is at her wit's—and almost dead—end, as the killer strikes again, and again.