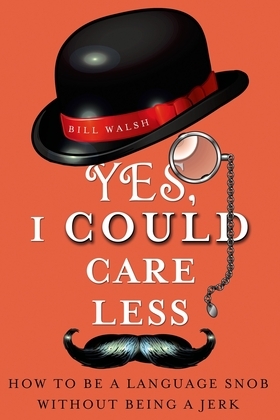 Yes, I Could Care Less

These are interesting times for word nerds. We ate, shot and left, bonding over a joke about a panda and some rants about greengrocers who abuse apostrophes. We can go on Facebook and vow to judge people when they use poor grammar. The fiftieth anniversary of the publication of The Elements of Style inspired sentimental reveries. Grammar Girl's tally of Twitter followers is well into six digits. We can't get enough of a parody of the Associated Press Stylebook, of all things, or a collection of "unnecessary" quotation marks.
Could you care less? Does bad grammar or usage "literally" make your head explode? Test your need for this new book with these sentences:
"Katrina misplaced many residents of New Orleans from their homes."
"Sherry finally graduated college this year."
"An armed gunman held up a convenience store on Broadway yesterday afternoon."
Pat yourself on the back if you found issues in every one of these sentences, but remember: There is a world out there beyond the stylebooks, beyond Strunk and White, beyond Lynne Truss and Failblogs. In his long-awaited follow-up to Lapsing Into a Comma and The Elephants of Style, while steering readers and writers on the proper road to correct usage, Walsh cautions against slavish adherence to rules, emphasizing that the correct choice often depends on the situation. He might disagree with the AP Stylebook or Merriam-Webster, but he always backs up his preferences with logic and humor.
Walsh argues with both sides in the language wars, the sticklers and the apologists, and even with himself, over the disputed territory and ultimately over whether all this is warfare or just a big misunderstanding. Part usage manual, part confessional, and part manifesto, Yes, I Could Care Less bounces from sadomasochism to weather geekery, from "Top Chef" to Monty Python, from the chile of New Mexico to the daiquiris of Las Vegas, with Walsh's distinctive take on the way we write and talk. Yes, I Could Care Less is a lively and often personal look at one man's continuing journey through the obstacle course that some refer to, far too simply, as "grammar."