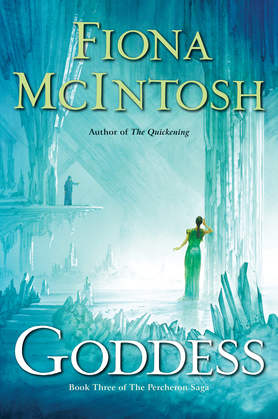 The city-state of Percheron is in crisis. Zaradine Ana has been captured by the mysterious Arafanz and his desert warriors and is being held in their isolated fort. It is also suspected that she is pregnant with Zar Boaz's son, the heir to the throne . . .

Though Lazar has made it out of the desert, his heroics in bringing the Valide and Grand Vizier to safety have cost him. Afflicted with the drezden illness that befalls him when he is weak, he is too sick to move from his bed, when help comes from an unexpected source . . .

Zar Boaz finds himself trapped by both his heart and his head. Though he can think of nothing but Ana, imprisoned in the desert, his country is on the brink of war and his Spur is helpless. Hatching a daring plan, he calls for Percheron's strongest to make one more pilgrimage into the desert, even as warships threaten Percheron's harbor, and the Goddess reaches the crest of her ascent, throwing all parties—mortal and divine—into a perilous battle for their hearts, their lives, and their souls.