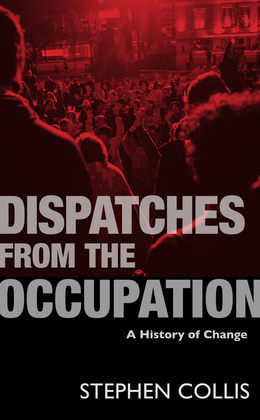 Dispatches from the Occupation

di Stephen Collis (Autore)
Acquista per 16,99 $ Estratto
Saggistica Storia Vari Saggi Scienze Umane Filosofia Filosofia Politica Scienze Sociali Politica Storia & Teorie
warning_amber
La tua organizzazione ha acquistato una o più licenze per questa risorsa dettagli
Somewhere at the core of almost every intellectual discipline is an attempt to explain change – why and how things change, and how we negotiate these transformations. These are among the most ancient of philosophical questions. In this collection of essays, award-winning poet Stephen Collis investigates how the Occupy movement grapples with these questions as it once again takes up the cause of social, economic, and political change.

Dispatches from the Occupation opens with a meditation on the Occupy movement and its place in the history of recent social movements. Strategies, tactics, and the experiments with participatory democracy and direct action are carefully parsed and explained. How a movement for social, economic, and political change emerges, and how it might be sustained, are at the heart of this exploration.

Comprising the second section of the book is a series of “dispatches” from the day-to-day unfolding of the occupation in Vancouver’s city centre as the author witnessed it – and participated in it – first hand: short manifestos, theoretical musings, and utopian proposals. The global Occupy movement has only just begun, and as such this book presents an important first report from the frontlines.

Finally, Dispatches from the Occupation closes with a reflection on the city of Rome, written in the shadows of the Pantheon (the oldest continually-in-use building in the world). In something of a long prose-poem, Collis traces the trope of Rome as the “eternal (unchanging?) city,” from its imperial past (as one of the “cradles of civilization”) to the rebirth of Roman republicanism during the French Revolution and the era of modern social movements – right up to the explosive riots of October 2011. Woven throughout is the story of the idea of change as it moves through intellectual history.
Format
EPUB
Protezione
Watermark
Data di pubblicazione
01 febbraio 2013
Editore
Talonbooks
Numero di pagine
256
ISBN
9780889227200
ISBN cartaceo
9780889226951
Dimensioni del file
5 MB