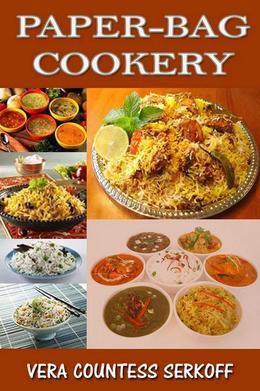 When Primitive Man first ventured on the daring experiment of applying heat to his newly-slain prey, he would most naturally adopt the obvious plan of suspending it on three sticks over a fire. The result, though no doubt to a certain extent tasty, would be smoked, charred on one side, raw on the other, and this, coupled with the frequency of burned fingers gained while rescuing the meat from the fire into which it fell when the sticks burned through, caused Primitive Man—or, more probably, Primitive Woman—to evolve the method of cooking known to us to-day as Paper-bag Cookery.

Paper not having been discovered, the prehistoric cook could not use the bags now placed at our disposal, but a very fair substitute was always ready to hand in the shape of green leaves, in which the meat was carefully wrapped. A hole was dug in the ground, and partly filled with large stones, on the top of which a fire was kindled.