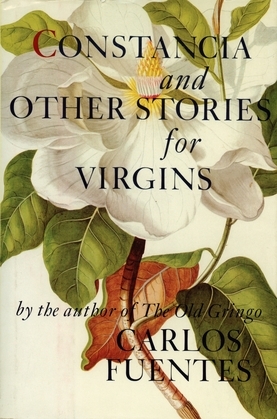 Constancia and Other Stories for Virgins

Renowned as a novelist of unsurpassed invention, Carlos Fuentes here presents his second collection of stories to appear in English. Where his first, Burnt Water, published in 1980, had as its underlying theme Mexico City itself, Constancia and Other Stories for Virgins extends its imaginative boundaries out to Savannah, to Cadiz, to Glasgow, to Seville and Madrid, both past and present. This new collection is more mysterious, more magical, too, than its predecessor, and in its five related stories Fuentes comes closer to the registers of language and feeling that he explored so memorably in Aura. It reveals Fuentes at the height of his powers--bold, erudite, enthralling.

In the title story, a man discovers his wife's secret complicity with the Russian actor who is their neighbor--a complicity that includes not just a previous life but possibly a previous death as well. He finds himself "a mediator . . . a point between one sorrow and the next, between one hope and the next, between two languages, two memories, two ages, and two deaths." In "La Desdichada," two students steal--and fall in love with--a store-window mannequin. In "The Prisoner of Las Lomas," a wealthy lawyer in possession of a powerful secret is held hostage by the past he has attempted to subvert and keep at bay. The celebrated bullfighter whose fame is the theme of "Viva Mi Fama" steps from the present into a past immortalized by Goya's portrait of the matador Pedro Romero; and the architects who are the "Reasonable People" of that story find themselves drawn into the irrational mysteries not only of religious fervor but of their famous mentor's identity--they discover "there are no empty houses," only a present fraught with the past.

Though each of these novella-length stories offers compelling evidence of Fuentes's talent for narrative free rein as well as for containment and closure, they are also brilliantly interwoven. Readers of his earlier work, especially of his acclaimed ribald epic, Christopher Unborn, will recognize with pleasure Fuentes's undiminished mastery of recurrent images and themes, and all readers will delight in the witty and evocative changes he rings on them. For those few readers who do not yet know the work of Mexico's foremost man of letters, these stories offer them the full gift of his imaginative resourcefulness.