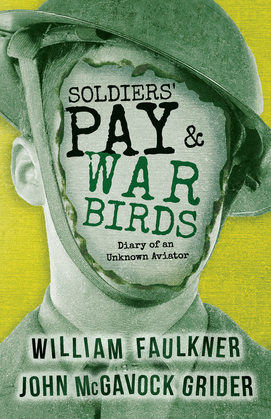 Soldiers' Pay and War Birds: Diary of an Unknown Aviator

Examining the reality of First World War aviators, this volume features William Faulkner’s astonishing first novel, Soldiers’ Pay, alongside the diary of an unknown veteran who died in action.


William Faulkner’s Soldiers’ Pay was first published in 1926 and explores the life of a severely wounded aviator when he returns from war to his small hometown. The seminal novel presents the struggles of many soldiers following the First World War and gives insight into the men’s physical and psychological trauma.

Accompanying Faulkner’s masterpiece is the diary of an American WWI aviator. The diary’s author served alongside the aviator in battle and published the text in honour of his comrade. John MacGavock Grider is commonly thought to be the diarist, with his memoirs being edited and published in 1926 by his friend and fellow aviator, Elliot White Springs. Detailing his life in battle from 20th September 1917 to late August 1918, Grider describes his flying experience and provides glimpses into a soldier’s off-duty life.


This new edition of Soldiers' Pay and War Birds: Diary of an Unknown Aviator is complete with two introductory poems by Thomas Hardy and Wilfred Owen. A remarkable volume, not to be missed by those interested in the First World War and American history.