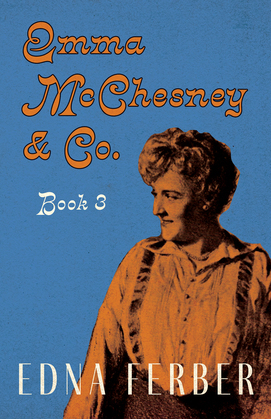 With an Introduction by Rogers Dickinson
by Edna Ferber (Author)
Buy for $6.99 Excerpt
Fiction Humorous Contemporary women
warning_amber
One or more licenses for this book have been acquired by your organisation details

Emma McChesney & Co. is the final instalment of Edna Ferber’s trilogy, and the comedic novel is full of new beginnings, frightening leaps of faith, and life-altering revelations.

First published in 1915, Emma McChesney & Co. brings the trilogy to a close as Emma McChesney’s son, Jock, moves to Chicago with his new wife, leaving his mother to debate the nest stages of her life. Alone in the overwhelming emptiness of her New York flat, Edna Ferber’s protagonist decides to throw caution to the wind and reverts back to her travelling saleswoman career. Boarding a ship to South America, Emma McChesney visits Brazil, Buenos Aires, and Argentina in an effort to drum up a new wave of custom for T. A. Buck’s Featherbloom Petticoats before their competition can.

But when she returns to New York, Emma McChesney faces a life-altering decision. Should she marry her sweetheart, T. A. Buck Jr? And if so, will she give up her job to become a dutiful housewife? Edna Ferber turns early twentieth-century expectations for women on their heads in this surprisingly modern classic. Emma McChesney & Co. is not to be missed by fans of Ferber’s hilariously entertaining trilogy.