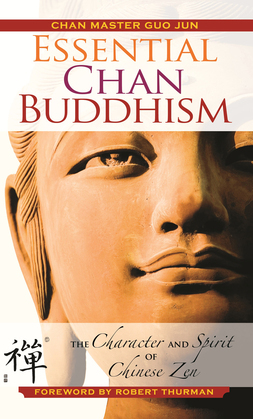 Essential Chan Buddhism is the rare unearthing of an ancient and remarkable Chinese spiritual tradition. Master Guo Jun speaks through hard-won wisdom on Chan's spiritual themes familiar to Western readers, such as mindfulness and relaxation in meditation, as well as profound, simply expressed teachings and insightful explorations of religious commitment. Essential Chan Buddhism filters formal spiritual practices through the lens of mundane and everyday life activities. The work captures the lyrical beauty and incantatory style of Guo Jun’s spoken English from the talks he gave at a fourteen-day retreat near Jakarta in 2010 and in subsequent conversations with his editor Kenneth Wapner. This value-priced hardcover edition is both a distinctive addition to Buddhist collections and a thoughtful gift for anyone looking for spiritual guidance.

Chan master Guo Jun is one of a new breed of international teachers taking the world’s great wisdom traditions into the twenty-first century. He is currently abbot of Mahabodhi Monastery in Singapore and teaches internationally. Chan master Sheng Yen’s youngest dharma heir, he served as abbot of his Pine Bush, New York, retreat center from 2005 to 2008. A native of Singapore, Guo Jun received his full monastic ordination in Taiwan. He is a lineage holder and successor in Chan as well as the Xianshou and Cien schools of Chinese Buddhism. Essential Chan Buddhism is his first book.

Kenneth Wapner’s Peekamouse Books is a book packager and editor. Clients include Bantam, Tarcher/Putnam, Ballantine, and Doubleday. He is well known for his work on Rabbi Jesus, Bones of the Master, and The Zen of Creativity.