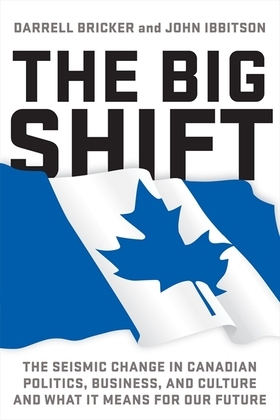 For almost its entire history, Canada has been run by the political, media and business elites of Toronto, Ottawa and Montreal. But in the past few years, these groups have lost their power—and most of them still do not realize it’s gone. The Laurentian Consensus, the term John Ibbitson has coined for the dusty liberal elite, has been replaced by a new, powerful coalition based in the West and supported by immigrant voters in Ontario. How did this happen?

Most people are unaware that the keystone economic and political drivers of this country are now Western Canada and immigrants from China, India and other Asian countries. Politicians and businesspeople have underestimated how conservative these newcomers are making our country. Canada, with its ever-evolving economy and fluid demographic base, has become divorced from the traditions of its past and is moving in an entirely new direction.

In The Big Shift, Darrell Bricker and John Ibbitson argue that one of the world’s most consensual countries is becoming polarized, exhibiting stark differences between East and West, cities and suburbs, Canadianborn citizens and immigrants. The winners—in both politics and business— will be those who can capitalize on the tremendous changes that the Big Shift will bring.