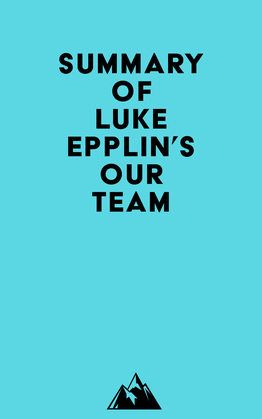 Summary of Luke Epplin's Our Team

by   Everest Media (Author)
Buy for $3.99 Excerpt
Nonfiction Nature, recreation and sports Sports & recreation Baseball
warning_amber
One or more licenses for this book have been acquired by your organisation details

#1 Bob Feller’s ascent from the cow pastures of Iowa to national prominence was as baffling as it was astonishing. He was a figure straight out of a dime-store novel, an adolescent dream come to life. In his first start with the Cleveland Indians, he tied the American League record of fifteen strikeouts in a single game.

#2 The color line between Feller and Paige was entrenched since the end of the nineteenth century, when white players like Adrian Cap Anson objected to playing against interracial competition. Eventually, owners in the major and minor leagues forged a gentlemen’s agreement not to sign Black players.

#3 Bob Feller’s legend was rooted in his family’s barn, which was an archetypal dark-red wooden structure a few miles northeast of Van Meter. He helped his father milk the cows, muck the barn, and lug water from the Raccoon River.

#4 In 1932, Bob’s father built a baseball field on the family farm. It was called Oak View Park, and it became the site of many games played by local American Legion teams. In 1934, Bob started playing baseball for the Oak Views.