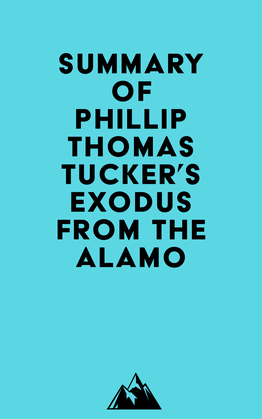 Summary of Phillip Thomas Tucker's Exodus from the Alamo

by   Everest Media (Author)
Buy for $3.99 Excerpt
Nonfiction History History by country United States
warning_amber
One or more licenses for this book have been acquired by your organisation details

#1 The traditional view of the Alamo defenders is that they were the highest minded of freedom fighters who died in defense of liberty, republican government, and democratic principles. However, many of the men who fought for Texas liberty were slave-owners.

#2 The Mexican government, unlike the American government, was opposed to slavery. The first Americans to settle west of Missouri in a vast land ruled by other powers, the Anglo-Celts who migrated to Texas brought no such enlightened thought with them.

#3 Slavery was a main economic factor in the development of Texas, and it was defended because few colonists doubted the truth that without it, the state would be destroyed.

#4 The Alamo was a symbol of the American Dream, but it was also a symbol of how easily race mixing could result in a unified people. The fear of an abolitionist Mexico played on the historic Southern-based paranoia of the Texas colonists.