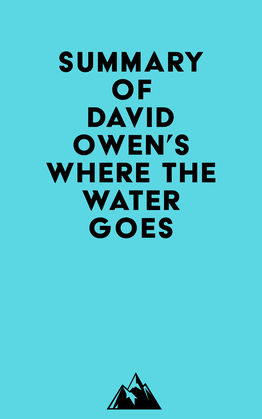 Summary of David Owen's Where the Water Goes

by   Everest Media (Author)
Buy for $3.99 Excerpt
Nonfiction Science and technics Science Earth sciences Hydrology
warning_amber
One or more licenses for this book have been acquired by your organisation details

#1 We were flying over Rocky Mountain National Park, thirty miles to the northwest. Our pilot, David Kunkel, was navigating with the help of an iPad Mini. People don’t usually think altitude is affecting them, but if you ask them to count backward from a hundred by sevens, they have trouble.

#2 I looked up Kunkel on Google and was dismayed to discover that he had landed his Cessna 340 on a highway in the Rockies after losing both engines. But I realized that nothing like that could happen to us, because the plane he would be using for our trip had just one engine.

#3 The Grand Ditch, which was built with pickaxes and black powder in 1890, moves water across the Continental Divide at La Poudre Pass and empties it into a stream that flows toward the state’s eastern plains.

#4 The headwaters are the first source of a river, and the rain shadow is the area where it doesn’t rain. If transporting water from one side to the other were impossible, most of the people who live and farm on the eastern side of the mountains would have to move.