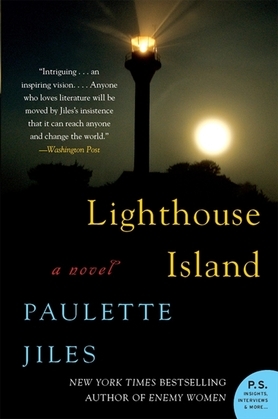 Paulette Jiles, the bestselling author of the highly praised novels The Color of Lightning, Stormy Weather, and Enemy Women, pushes into new territory with Lighthouse Island—a captivating and atmospheric story set in the far future—a literary dystopian tale resonant with love and hope.

In the coming centuries the world's population has exploded. The earth is crowded with cities, animals are nearly all extinct, and drought is so widespread that water is rationed. There are no maps, no borders, no numbered years, and no freedom, except for an elite few.

It is a harsh world for an orphan like Nadia Stepan. Growing up, she dreams of a green vacation spot called Lighthouse Island, in a place called the Pacific Northwest.

When an opportunity for escape arises, Nadia embarks on a dangerous and sometimes comic adventure. Along the way she meets a man who changes the course of her life: James Orotov, a mapmaker and demolition expert. Together, they evade arrest and head north toward a place of wild beauty that lies beyond the megapolis—Lighthouse Island.