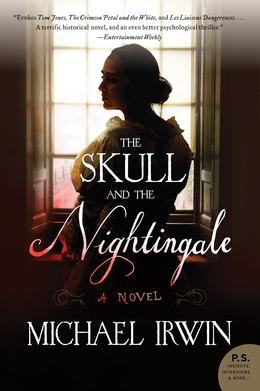 The Skull and the Nightingale

Michael Irwin’s The Skull and the Nightingale is a chilling and deliciously dark, literary novel of manipulation and sex, intrigue and seduction, set in 18th-century England.

When Richard Fenwick returns to London, his wealthy godfather, James Gilbert, has an unexpected proposition. Gilbert has led a sedate life in Worcestershire, but feels the urge to experience, even vicariously, the extremes of human feeling: love, passion, and something much more sinister.

It becomes apparent that Gilbert desires news filled with tales of carousing, flirtation, excess, and London’s more salacious side. But Gilbert’s elaborate and manipulative “experiments” into the workings of human behavior soon drag Richard into a Faustian vortex of betrayal and danger where lives are ruined and tragedy is only a step away.

With echoes of Dangerous Liaisons, Michael Irwin’s The Skull and the Nightingale is an urgent period drama that seduces the senses.