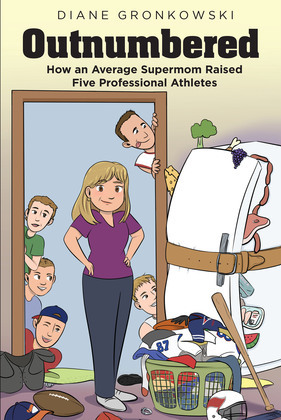 How an Average Supermom Raised Five Professional Athletes
by Diane Gronkowski (Author)
Buy for $9.99 Excerpt
Nonfiction Health & fitness Daily living
warning_amber
One or more licenses for this book have been acquired by your organisation details

Did I have any idea that I was raising five future athletes? Of course not. I have driven or flown hundreds of thousands of miles over the last thirty-plus years to ice rinks, baseball diamonds, football fields, and basketball courts, to mention a few.

Besides athletes, they are now entertainers, fathers, entrepreneurs, role models, and familiar faces on TV. I dedicated 24/7/365 to raise my "boys" to be hard workers, and good citizens. Outnumbered is a book about some of the events in my sons' lives as told by me, the only female on the team. I never would have dreamed that I would have the life that I had while raising these incredible athletes.