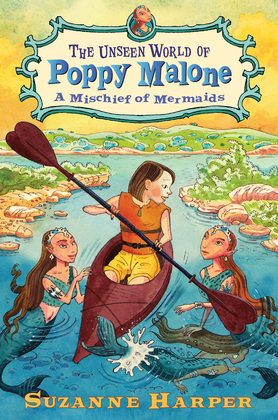 The Unseen World of Poppy Malone #3: A Mischief of Mermaids

Nine-year-old Poppy Malone’s parents are paranormal investigators. They research vampires, fairies, UFOs, and other strange things. When they need help, it’s up to scientific Poppy. Her twin brother, Will, is too lazy. Her older sister, Franny, is too busy with teenage stuff. And Rollie, the baby of the family, is too little.

In the third book in the spooky and hilarious Unseen World of Poppy Malone series, A Mischief of Mermaids, Poppy makes friends with Nina, a mermaid who lives in Lake Travis. When Franny messes with Nina’s magic, she gets transformed into a mermaid herself, and Poppy has to figure out how to turn her sister back into a human.