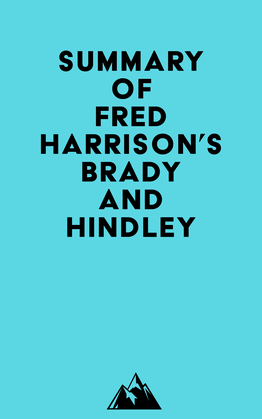 de   Everest Media (Autor)
Comprar por 3,99 $ Extracto
No Ficción Actualidad y reportajes Crimenes verdaderos
warning_amber
One or more licenses for this book have been acquired by your organisation details

#1 The murder of Mona Tinsley, a 10-year-old girl, attracted the attention of the police. They used a spiritualist to help them track down the killer, Frederick Nodder. Ian was 8-years-old when he experienced his first trauma. He saw a Clydesdale break a bone.

#2 When Ian Stewart was 12, his dog became ill. He prayed to God that his pet would not die. His prayers went unanswered, which convinced Ian that there was no personal God. He then discovered that he was born a bastard.

#3 Ian was now beyond his mother’s control, and she agreed to his departure. He went to live with his mother in Manchester, and he was sent to borstal training in Hull. He was psychopathic by the age of 17.

#4 Before his release from borstal, Brady carefully filed away a list of names of inmates whom he thought would be useful to him in his career as a big-time crook. He made sure that he had a contact in every major town in the north of England.