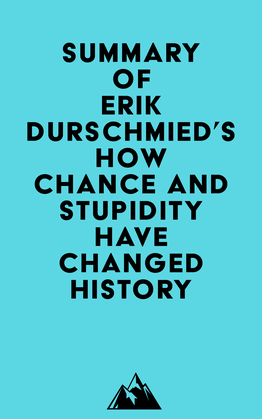 Summary of Erik Durschmied's How Chance and Stupidity Have Changed History

#1 The world is still recovering from the attack on America on September 11, 2001. The American president rallied his nation’s support with a Let’s get the bastards! He then ordered the invasion of Afghanistan against an unclear enemy.

#2 In the story of Troy, Paris, the prince of Troy, visited by three goddesses who handed him a golden apple, asking him to choose the fairest among them. He chose Helen of Sparta, and brought her to Troy. The Greeks then invaded and laid siege to the city.

#3 The Trojan War was a result of the Greeks’ disregard for the warnings by the philosopher Laocoön. The war was a series of raids, and possibly actions fought by sea. The ten-year siege could not have lasted ten continuous years without harvesting seasonal grain, which armies on both sides would have starved without.

#4 The Hinge Factor at Troy was victory by stratagem. The Greeks learned from the Trojans, Trojan refugees founded Rome, and the Romans conquered Greece, only to adopt its culture.