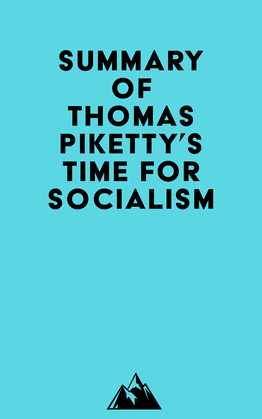 by   Everest Media (Author)
Buy for $3.99 Excerpt
Nonfiction Business & economics Economic conditions
warning_amber
One or more licenses for this book have been acquired by your organisation details

#1 I have tried to outline some elements for a participatory socialism in my last book. These are only a small starting point among others, and the reader should not expect them to be fully realized anytime soon.

#2 The long march toward equality and participatory socialism is already well under way. Inequalities have been reduced over the long term thanks in part to the new social and fiscal policies introduced during the twentieth century.

#3 The failure of the French Revolution was the result of the inequality drift in nineteenth-century France. In Paris, the richest 1 percent owned about 67 percent of total private property in 1910, versus 49 percent in 1810 and 55 percent in 1780.

#4 The rise of the welfare state between 1910 and 1920, and the stagnation of this state since the 1980s, has led to a certain equality of access to the basic goods of education, health, and economic and social security in Europe. However, the march toward the social state will have to resume in rich countries and be accelerated in poor countries.