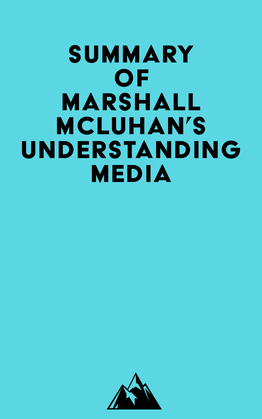 by   Everest Media (Author)
Buy for $3.99 Excerpt
Nonfiction Human science Language arts & disciplines Communication studies
warning_amber
One or more licenses for this book have been acquired by your organisation details

#1 The medium is the message, and the content of any medium is another medium. The content of speech is an actual process of thought, which is itself nonverbal. The essence of automation technology is the opposite. It is integral and decentralist in depth, just as the machine was fragmentary and centralist in its patterning of human relationships.

#2 The electric light is a perfect example of how people fail to study media. It is not until the light is used to spell out some brand name that it is noticed as a medium. The message of the light is completely radical, pervasive, and decentralized.

#3 The same kind of total, configurational awareness that reveals why the medium is socially the message has occurred in the most recent and radical medical theories. In his book Stress of Life, Hans Selye describes the dismay of a research colleague when he heard about Selye’s theory: he had decided to spend his life studying the pharmacology of dirt.