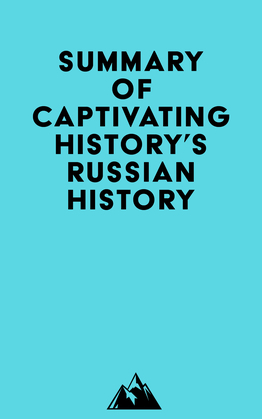 by   Everest Media (Author)
Buy for $3.99 Excerpt
Nonfiction History History by country Europe Russia
warning_amber
One or more licenses for this book have been acquired by your organisation details

#1 The Slavic peoples were pagans who worshipped deities based on natural phenomena. The most important god in Eastern Slavic paganism was Perun, the God of Thunder, who may be most closely compared to Thor in Norse mythology.

#2 The Rus were a tribe that was invited to rule over the various warring tribes in what is now northwestern Russia. They were led by Rurik, who established himself in a settlement called Holmgard, on the eastern bank of the River Volkhov, several miles to the south of the later city of Novgorod.

#3 Cleg’s decision to move his capital to Kiev had significant consequences for the Russian state. The center of gravity in Russia moved from the Baltic north to the southern steppes, and Kiev was strategically located on the River Dniepr, which flows into the Black Sea.

#4 In 945, Igor, the son of Rurik, was captured by the Drevlians and executed. The Russians had bent down two birch trees to his feet and tied them to his legs, then let the trees straighten again, thus tearing the prince's body apart.