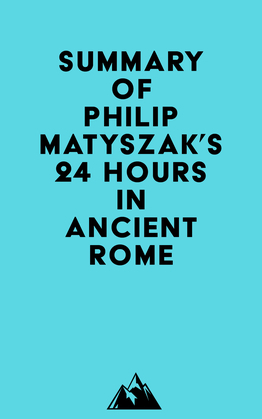 by   Everest Media (Author)
Buy for $3.99 Excerpt
Nonfiction History Ancient Rome
warning_amber
One or more licenses for this book have been acquired by your organisation details

#1 This book takes us through one day in the life of Hadrian’s Rome, with the city seen from the different perspectives of twenty-four of its inhabitants. The people are the city: the buildings and monuments that tourists admire are secondary, important only as the physical echo of the people who built and lived among them.

#2 The city of Rome was more than just a collection of buildings and a society of interlocked communities. It was an attitude, and an entrepreneurial spirit that allowed the Romans to believe that, no matter how bad things were, they could always be better.

#3 The Roman fire department, the Vigiles, had a special duty to maintain law and order on the streets after dark, but their main function was fire prevention. The city was divided into seven districts for fire prevention purposes, and Brevis and his colleagues were well aware that it was in the district they covered that the worst fire in Roman history began.

#4 The Roman watch has the power to break into any premises where they suspect a fire might get out of control. They are not above handing out some basic physical chastisement, and they have long-established protocols for attacking the fire.