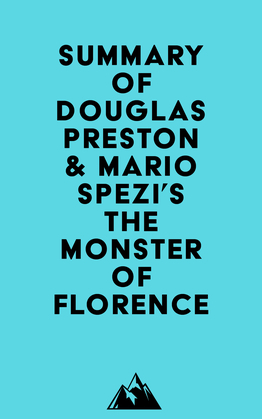 Summary of Douglas Preston & Mario Spezi's The Monster of Florence

#1 On June 7, 1981, Mario Spezi was assigned to cover the crime desk for La Nazione, a newspaper in Florence, Italy. He was approached by the reporter who usually handled the crime desk, who said that he had a little appointment. Spezi was told to hang around police headquarters in case something happened.

#2 Spezi saw the body of the young girl, lying at the foot of a little embankment, among wildflowers. She had been shot, and her blue eyes were open and seemed to be looking up at him with surprise. Everything was unnaturally composed, immobile, with no signs of struggle or confusion.

#3 The crime scene was horrifying. The two victims were shot in the back of the car while they were having sex, and their killer left them at the bottom of a hill, exposed and vulnerable, next to a footpath that ran parallel to the road.

#4 Inspector Cimmino explained that the killer had cut out the victim’s vagina and took it away with him. He said that it was simply not there anymore.