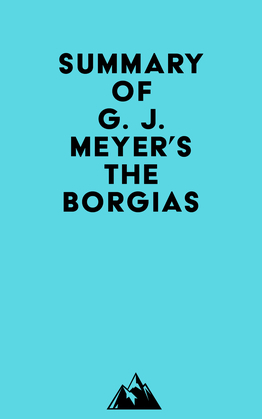 #1 The death of Pope Nicholas V, which took place in 1455, was a deeply worrisome thing. The cardinals were assembled in Rome because ten days had passed since the pope’s death. The conclave of 1455 was officially in session.

#2 The process of choosing a pope is governed by simple rules that have evolved over a millennium and a half. The election process is always complicated, though, because many competing forces always come into play.

#3 The problems facing the cardinals go much deeper than anything Nicholas did or failed to do. They are the residue of the century and a half of discord that preceded his reign. The election of Nicholas was only four years after the return of the last exiled pope to Rome, and it was not until two years after his election that the last antipope abandoned his claim to the throne.

#4 The fall of Constantinople, the capital of the Byzantine Empire, was a world-changing event. It was a tragedy for the East, but the West was not shocked because they had stood by passively through the years when the Turks drew closer to Constantinople.