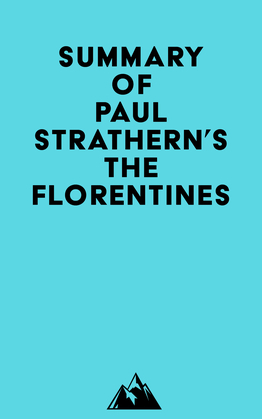 Summary of Paul Strathern's The Florentines

by   Everest Media (Author)
Buy for $3.99 Excerpt
Nonfiction History History by country Europe
warning_amber
One or more licenses for this book have been acquired by your organisation details

#1 In 1308, the exiled Florentine poet Dante Alighieri was lost in a dark wood, with no sign of a path. He had no idea how he had arrived where he was. He saw a ghostly form that said, I am not a man. I was a poet who sang of Troy.

#2 The Divine Comedy is the greatest poem in the western canon. It is written in the Tuscan dialect of Dante’s native Florence, and it is imbued with the spirit of the medieval era. Yet it is instantly recognizable as being of the modern era.

#3 Dante Alighieri was born around May 1265, and he wrote the Divine Comedy in 1300. The poem is set in the year 1300, when he was a serving signore. It is a constant reminder to him of how low he had fallen.

#4 Dante’s father was a small-time moneylender, who occasionally speculated in plots of land. His mother was from the distinguished, ancient Abati family, but died when he was still a child. This fact may explain a certain austerity and lack of emotion in his character.