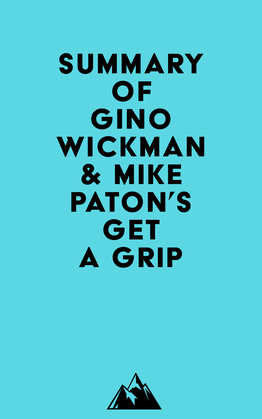 Summary of Gino Wickman & Mike Paton's Get A Grip

de   Everest Media (Autor)
Comprar por 3,99 $ Extracto
No Ficción Comercio y Economía Acción emprendedora
warning_amber
One or more licenses for this book have been acquired by your organisation details

#1 Eileen was furious with her business partner, Vic, for the way he had treated the other leaders in the meeting. She thought about quitting the partnership with him. However, she wasn’t going to walk away from what they had built over the last ten years.

#2 The company had begun to experience problems, and Eileen had found them all to be caused by the sales team’s inability to meet their new revenue goal. The team had added people and upgraded talent last year in an attempt to meet their five-year goal of $20 million in revenue, but so far they hadn’t reached it.

#3 The Eileen method was effective at solving the problems at Swan, but it came at a cost. It cost Eileen her most promising ally in the company, who was eventually fired because of her inability to hit sales goals.

#4 The executive committee met to discuss client retention, and Evan stammered that he wasn’t sure the numbers were accurate. Eileen suggested they brainstorm ways to improve the team’s performance, and Art suggested conducting a focus group with some clients whose spending had declined or stopped.