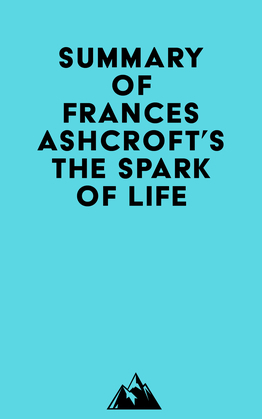 Summary of Frances Ashcroft's The Spark of Life

by   Everest Media (Author)
Buy for $3.99 Excerpt
Nonfiction Science and technics Science Life sciences Biophysics
warning_amber
One or more licenses for this book have been acquired by your organisation details

#1 The idea that electricity was used to waken the monster is a misconception that probably originated with the famous 1931 film in which Boris Karloff played the monster. Shelley herself was more circumspect and only used the term instruments of life.

#2 Static electricity is the buildup of electrical charges on our bodies, which can be caused by the atmosphere being dry or humid. It can also be caused by metal objects close to us, or another person.

#3 The term static electricity refers only to the fact that the positive and negative electric charges are physically separated. As soon as a positively charged material comes close enough to a negatively charged one, current will flow from one to the other.

#4 The first machine capable of generating static electricity was invented by the German Otto von Guericke around 1663. It consisted of a ball of brimstone, about the size of a child’s head, with a wooden rod through its centre. The rod rested in a cradle, enabling the ball to be rotated on its axis by cranking the handle. When a dry hand or a pad of material was held against the whirling ball, static electricity was generated.