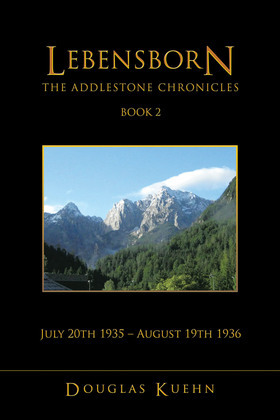 In this, the second volume of the Addlestone Chronicles, the focus is
on the Nazi’s vision of creating a ‘Master Race’ in preparation for their
1000-year Reich. To accomplish this, they promoted, arranged, and
eventually only permitted, ‘breeding’ between genetically ‘pure’ Aryans.
This Europe-wide programme was called Lebensborn.
Set in the mid-1930s, action takes place in England, Germany, Italy,
and France. A wealthy, young English upper-class couple, James and
Louise Harcourt-Heath, are recruited as spies by the British Security
Service department, MI5. After unearthing the secrets of the primary
Lebensborn facility, they are assigned to continue their espionage activities
at the 1936 winter and summer Olympic games in Hitler’s Germany.
Both novels offer readers fast-moving and gripping adventure stories as
well as historical warnings. Parallels are evident between the conditions
in Europe in the 1930s and political developments today in the US,
the UK, and elsewhere. Similar circumstances enabled fascist dictators
in Germany, Italy, Spain, and Portugal.
The third volume of the Addlestone Chronicles is set to be published in
the autumn of 2022. Partially set in Ireland, it follows the same English
couple’s attempts to unearth Nazi spies in the neutral Irish Free State
and prevent the Nazi kidnap of a physicist, working on nuclear fission
at the Cavendish Lab in Cambridge, England.