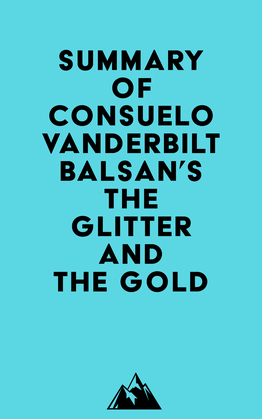 Summary of Consuelo Vanderbilt Balsan's The Glitter and the Gold

#1 My family has its origins in the Netherlands. My grandfather, William H. Vanderbilt, had an unmerited reputation for indifference to the welfare of others. However, according to a friend of the family, Mr. Vanderbilt said, the public be damned.

#2 My grandmother, Maria Louisa Kissam, was the daughter of a clergyman of the Dutch Reformed Church. She had eight children, with my father being the second son. She was a lovely old lady, and all her grandchildren loved her.

#3 My mother, Alva Erskine, was descended from the Stirlings, and she had a strong personality. She was a born dictator, and she dominated events about her as thoroughly as she eventually dominated her husband and her children.

#4 My mother, Consuelo Yznaga, was a leader of New York society. She had many ambitions, including becoming a leader of society. She gave a fancy dress ball for the opening of her new house, 660 Fifth Avenue, on March 26, 1883.