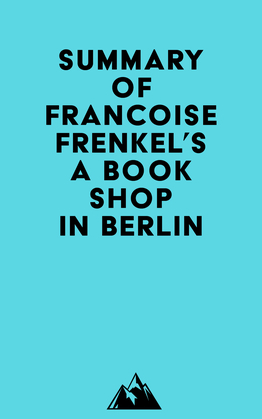 Summary of Francoise Frenkel's A Bookshop in Berlin

#1 I had a love of books as a child. I would spend hours leafing through a book, and I would spend my spare time browsing the bouquinistes’ old, damp cases of books. When I returned to Paris after the first war, everything had been taken away.

#2 I began to see the importance of a book’s reader. I would place the book I thought was appropriate down close to a reader, discreetly, so they wouldn’t feel it had been suggested to them. I grew fond of my customers.

#3 I attempted to open a French bookshop in Berlin, Germany. I was not unfamiliar with the country, having spent some time there as a girl to perfect my German and pursue music studies with Professor Xaver Scharwenka. I was able to get a bookshop open, but the German government was against it.

#4 I opened a bookshop in Paris in 1921, and it was a big day for my female customers when the newspapers and fashion magazines arrived. They would swoop on them with exclamations of delight.