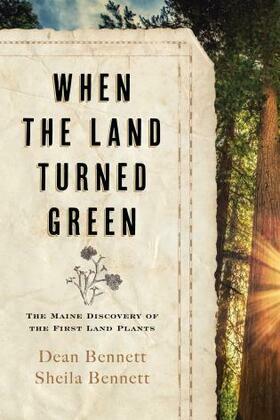 When the Land Turned Green

Deep in the wilderness of northern Maine in the mid-1950s, a Harvard PhD student is wading down a mountain stream into a remote valley. He is taking his first steps to map the geology of 300 square miles of Baxter State Park. He soon discovers a series of unusually shaped rock outcrops—part of an unknown geologic formation, hundreds of millions of years old, still mystifying today because of its relative lack of change despite nearby volcanic activity and massive land movement. Wading on, he has another surprise. In a thin layer of black shale beside the stream, he finds a small fossil of a plant.

Little does he know, but his discovery of Perticaquadrifaria will help scientists unlock the details of a major event in the history of our planet—the transition of plants to land, an occurrence that continues to have a critical influence on the Earth’s life-supporting processes, including climate.

The 400-million-year-old, Devonian Era Pertica fossils have been found nowhere else on Earth but that enigmatic rock formation deep in the Maine woods. Pertica was one of the very first land plants and is thought to have been the tallest of the time. Today, the site of the fossil’s discovery lies in the shadow of an Eastern White Pine, which now takes the ancient plant’s place as the tallest plant on the land in the eastern United States.

This fascinating story explores the work of geologists and paleobotanists as they attempt to demystify the land and reveal the ancient life forms that settled on it. It explores the hypothesis that these two tall plants (Pertica and White Pine) are related and asks: What can these two plants, one ancient, and one modern, tell us about the past and perhaps hint at the future?