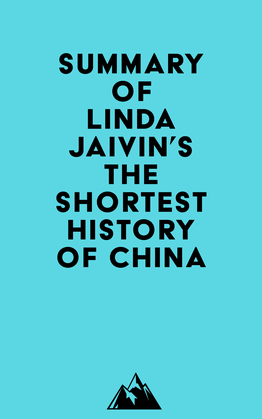 Summary of Linda Jaivin's The Shortest History of China

#1 Around 780,000 years ago, the Yellow River flowed much closer to the place we call Beijing than it does now. The area was home to two tribes, the Hu and Xi, from whom the Han Chinese claim descent.

#2 The Yellow Emperor, who is said to have invented writing, is the basis of the popular claim that China has 5000 years of recorded history. The earliest hard evidence of Chinese script dates back 3500 years, which makes it the third-or fourth-oldest system of writing in the world.

#3 The Shang dynasty was led by warlike and superstitious rulers. They kept slaves, including musicians and dancers. They used a calendar based on the cycles of the moon and the solar year, and invented a system of timekeeping that divided days into twelve two-hour blocks.

#4 The invention of writing allowed the Zhou dynasty to govern a large kingdom. The dynasty’s first rulers reportedly governed so wisely that they presented future rulers with a dilemma: how to re-create that perfect polity.