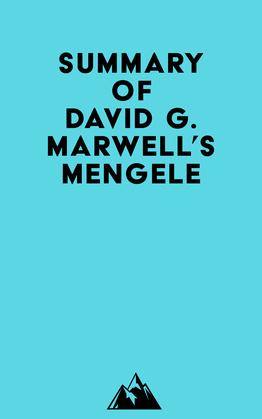 by   Everest Media (Author)
Buy for $3.99 Excerpt
Nonfiction History History by country Europe Germany
warning_amber
One or more licenses for this book have been acquired by your organisation details

#1 Mengele was a doctor who was assigned to the Auschwitz concentration camp. He was near the center of a brave new world, and as the camp began to dismantle, he was moved to the margins. He became both the personification of the Holocaust and its most notorious author.

#2 I was assigned to the international investigation to locate Mengele and bring him before a court of law in 1985. I was part of a team of historians who worked as advocates, mining archives for evidence, interviewing individuals for elusive details, and consulting experts for context and continuity.

#3 The hunt for Josef Mengele was the most publicized case that the OSI had pursued, and it was a mixture of politics and emotion for the three countries involved. For me, it was intensely personal, as I knew no family member that Mengele had harmed.

#4 I had planned to write a book about the Mengele investigation, but as I continued to read about Mengele, I realized that I wanted to learn more about him. I decided to extend my subject beyond the investigation to an examination of the man himself.