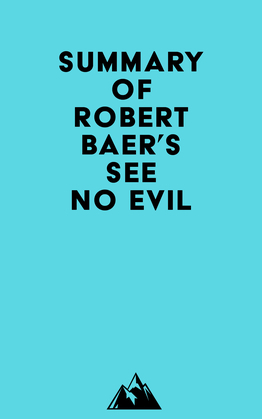 #1 I was summoned to Fred Turco’s office, and he told me that the FBI had been sent to investigate me for trying to assassinate Saddam Hussein. The accusation was false, but it didn’t matter. My career was over.

#2 I was being investigated for a conspiracy to commit premeditated murder, the murder of Saddam Hussein. I had the right to an attorney, but I didn’t want one. I didn’t need one. I knew that in an investigation like this, you never give up anything freely.

#3 I knew Ahmad Chalabi well. I had been in northern Iraq when the meeting took place, and I knew beyond a shadow of a doubt that Chalabi had invented this story from scratch. He must have thought that if he could swindle the Iranians into believing that the NSC and the White House were finally serious about getting rid of Saddam, they would have no choice but to throw their support behind Chalabi and his faction.